A white-sand beach, coconut trees, and crystal-clear waters. The natural beauty of Porto de Galinhas combines all of this and much more. Ecotourism and adventure tourism enthusiasts will love to go on buggy rides around the region and to go diving in the natural pools.

There is a true paradise located only about 60 km from the city of Recife. Containing breathtaking beaches, it is ideal for visitors who are planning to relax and admire the landscapes. We are talking about Porto de Galinhas, in the municipality of Ipojuca. Renowned for its natural beauty, it is one of the favorite destinations among nature lovers.

Home to an ecosystem that contains rich wildlife and vegetation, the region boasts coral reefs, mangroves, and abundant marine life. Also, the region is renowned for protecting the environment and for developing projects to help conserve biodiversity. If you are planning to recharge your batteries surrounded by nature, this is the place for you. 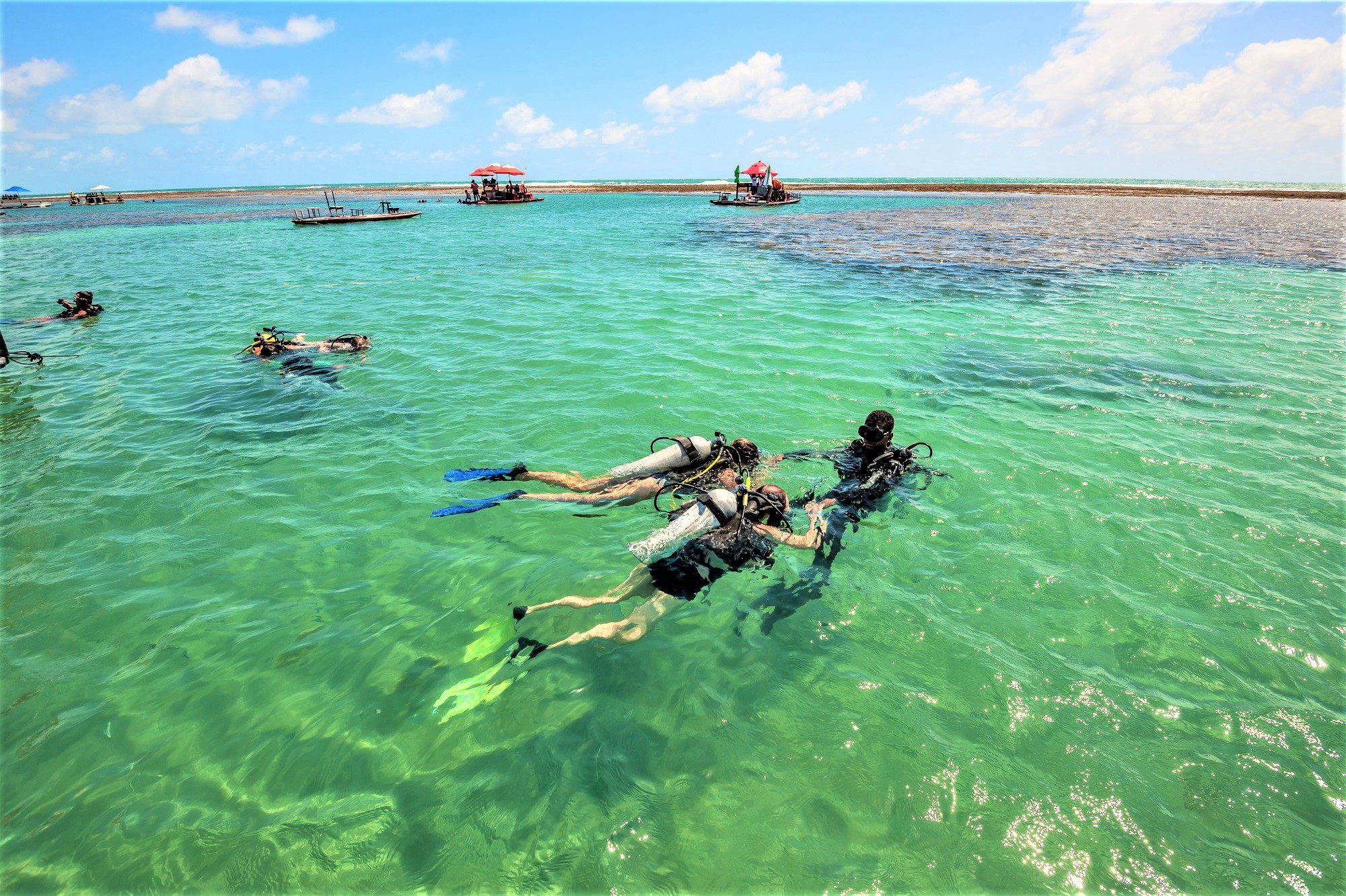 Adventure enthusiasts will also love Porto de Galinhas. The beach is a favorite among divers in the region. Visibility is excellent and, on any given diving expedition, they will get to see amazing marine life, including crustaceans, sea turtles, and seahorses, as well as submerged ships and shipwrecks.

Divers usually prefer deeper natural pools such as the ones on the outskirts of Santo Aleixo Island. There are activities for beginners as well as for experienced divers.

Maracaípe beach, located a few kilometers from Porto de Galinhas, offers visitors other options such as surfing and raft rides. It is a quieter alternative for tourists traveling with their families. On the other hand, Muro Alto beach contains huge sandstone walls, hence the name. It is the ideal location for buggy rides, an excellent way to explore the beautiful region. The beach is also great for visitors who enjoy kayaking and other water sports.

Whether you are looking for a quiet vacation on the coast or you want to have an exciting adventure under the sea, Porto de Galinhas is the perfect place for you. If you are ever in the state of Pernambuco, make sure you pay a visit to this charming region!

By Plane
+55 (81) 3322-4188
Porto de Galinhas is located approximately 60 km from Recife International Airport, the only airport in the region. Since it is so close to the capital city, getting there is very easy.

By Bus
+55 (81) 3207-1088
Buses from Recife to Porto de Galinhas depart from three different locations: Santa Rita Wharf Bus Station, Recife Bus Terminal (TIP), and Recife International Airport. The coaches take approximately two hours to get to Porto de Galinhas. As there is no bus station in Porto de Galinhas, the bus makes several stops along the main street in the village.

Personal Vehicles and Rentals
Visitors can drive from Recife to Porto de Galinhas. If you are leaving from Recife Airport, you will need to take Federal Highway BR-101 and later turn off into State Highway PE-060, which will take you to the district of Ipojuca. From there, you will follow State Highway PE-038 to the city of Nossa Senhora do Ó. After that, take Federal Highway BR-009, which passes by Muro Alto Beach and Cupe Beach, and goes all the way to Porto de Galinhas Village Center.

On Foot
The Porto de Galinhas coastline stretches for 18 km. A walk along the waterfront and around the village center is great fun.

Personal Vehicles and Rentals
Since local traffic is really light, a good option to get around is to rent a car.

Taxis and Ridesharing Companies
One of the options to get around the city is to use taxis and ridesharing companies.

Porto de Galinhas is a destination that can be enjoyed all year round. The average temperature in the region is 28°C and the weather is constantly warm.