When it comes to leisure and entertainment, the capital of Rio Grande do Norte offers its visitors a unique experience with its beautiful beaches, white sand dunes, and rich diverse culture.

Natal is synonymous with tropical weather and natural beauty. With more than 300 days of sunshine a year, the city has rightly earned the nickname of “City of the Sun”.

The city has countless attractions, rich culture, and diverse cuisine. Praia do Meio and Praia dos Artistas are two popular beaches that are connected. Containing many natural pools, they are ideal for those who want to swim in calmer waters. 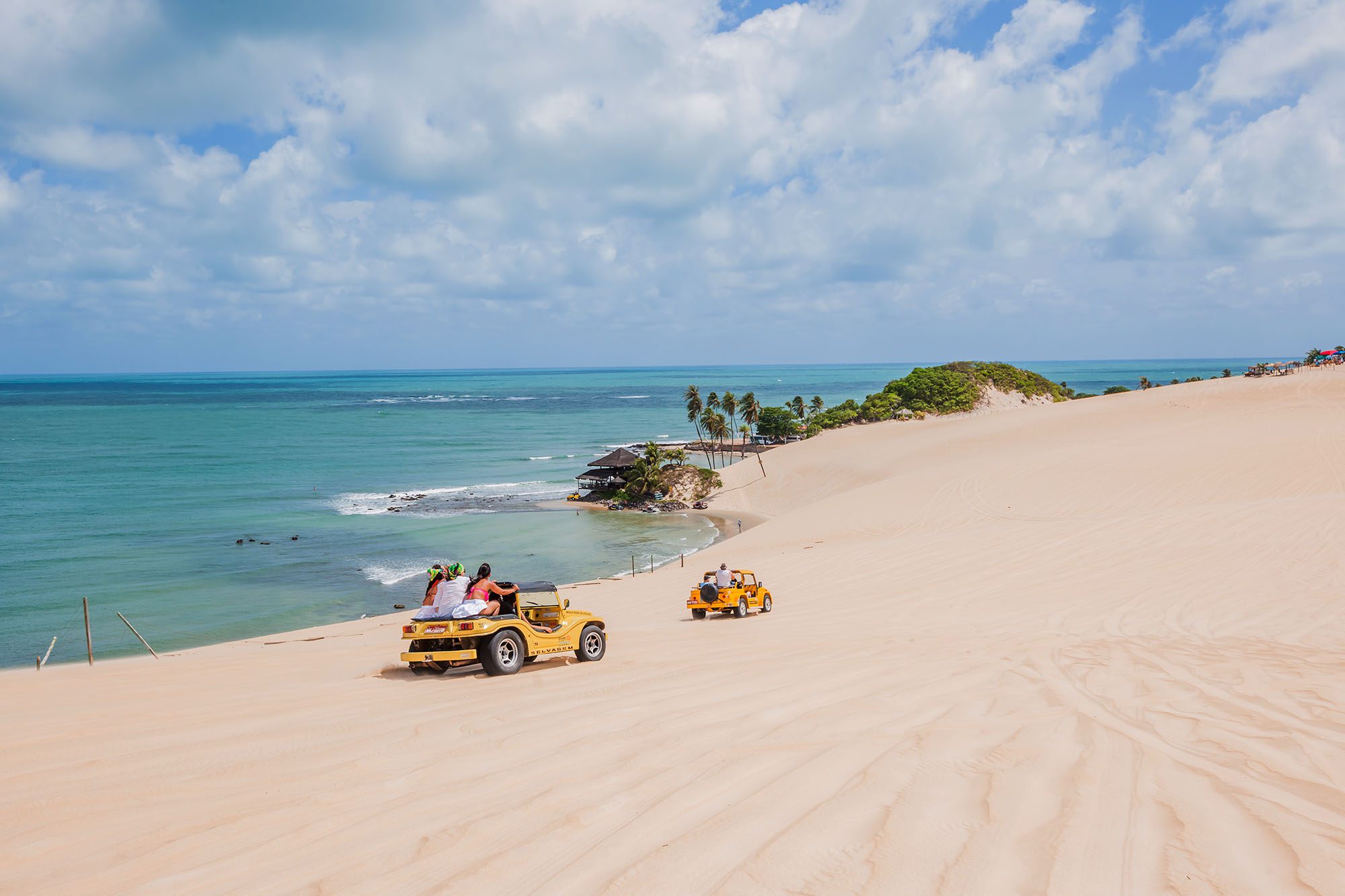 A buggy ride around local dunes

Ponta Negra Beach, located 12 kilometers from the center of the city, is one of the most popular in Natal. It is home to the famous Morro do Careca (Bald Man’s Hill), a local dune surrounded by Atlantic forest that measures over 100m in height. It is a well known local landscape that can be seen on most postcards of the city. Ponta Negra neighborhood is one of the busiest places in the city. There are several bars and restaurants where you can enjoy the incredible view and typical local cuisine along Roberto Freire Avenue, Praia Ponta Negra Avenue, and surrounding areas.

The local cuisine in Rio Grande do Norte is extremely rich and diverse. The list of ingredients for their main local dishes include shrimp, sun-dried beef, fish, cassava, and tapioca. As for seafood, shrimp is by far the favorite in the city, so much so that there is an Annual Shrimp Festival in the month of November. Some of the local delicacies include crab stew, a very popular option with tourists in local restaurants, tapioca crepes, and regional fruit-flavored ice cream and popsicles.

One of the most visited tourist attractions in the region is the Pirangi cashew tree, the largest of its kind in the world. The huge tree is located at Pirangi do Norte beach, covering an area of approximately 8,500m². The tree has a perimeter of approximately 500m and produces between 70 and 80 thousand units of the cashew fruit per harvest.

Among the many monuments in the city of Natal, one of the most important is the Fortress of the Three Wise Men (Fortaleza dos Reis Magos). It was the city’s first building and has been added to the National Institute of Historic and Artistic Heritage List. The building is located on Forte Beach, another popular tourist spot in the city, and preserves exposed cannons on the top of the building, a chapel containing a freshwater well, and original living quarters.

There are also several worthwhile attractions near the city of Natal. If you can spare a few more days, you should definitely explore the region. Let’s start with the Dunes of Genipabu, located only about 20km from the city. Pipa Beach, located in Tibau do Sul, includes a series of beaches such as Love Beach (Praia do Amor), Madeiro Beach, and Cacimbinhas, where renting a quad bike can be a lot of fun. And only a 102-km drive away, you will find the beautiful city of São Miguel do Gostoso, renowned for being a perfect spot for kitesurfing and windsurfing due to strong winds all year round.

One thing is for sure: there is no shortage of beautiful locations to fall in love with in Natal.

By Plane
+55 (84) 3343-6060
Natal Airport is located in São Gonçalo do Amarante, approximately 15 km from downtown Natal. The airport operates domestic and international flights.

By Bus
Natal has plenty of bus routes that will take you all over the city and to all the tourist attractions.

Personal Vehicles and Rentals
A great way to get around the city or to visit nearby destinations in the state of Rio Grande do Norte is to rent a car.

Taxis and Ridesharing Companies
Taxis and ridesharing companies are a comfortable way to get around the city.

There is sunshine all year round, so we recommend light clothes and lots of sunscreen. The period between the months of March and July is when it rains the most, but it will in no way affect your tours or stop you from having fun.