Besides all the wonders that make Porto de Galinhas such a renowned destination, the state of Pernambuco’s amazing cuisine might surprise the visitor who ventures to local bars and restaurants.

In Porto de Galinhas, charms go beyond natural beauty. The local dishes taste like the ocean and suit all sorts of preferences. The region’s seasonings and scents can be savored in dishes made of seafood, clam and fish – all of which feature a touch of Pernambuco’s culture.

The breakfast menu, full of native fruits, cake and tapioca (a sort of crumb made of manioc and filled with diverse flavors), is an essential step in the region’s gastronomic ritual. For lunch, savoring the local flavors in restaurants by the sea is the best option. How about a nice stroll on the beach afterwards? 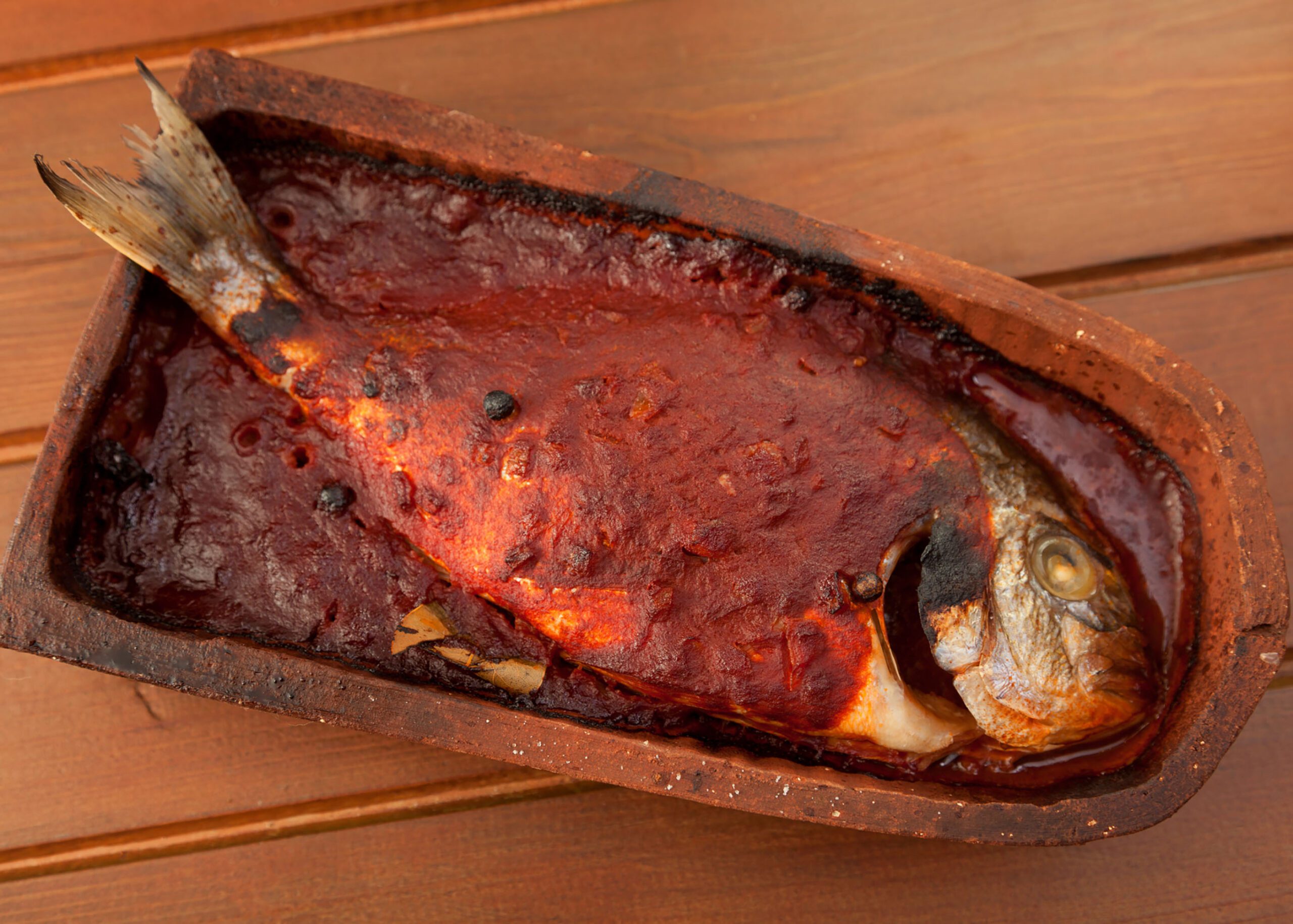 Peixe na telha, made of fish with cream or tomato sauce and cheese – baked in a tile.

The northeastern cuisine’s elements are noticeable in the regional dishes. Because of that, ingredients like manioc, curd cheese, corn, couscous and sun-dried beef are very easy to find in local restaurants. When combined with different elements, seafood gains even more remarkable flavors.

One of the most famous regional dishes is peixe na telha, made of fish with cream or tomato sauce and cheese – baked in a tile. Gratin manioc filled with sun-dried beef is also on the top 10 best-selling dishes in local restaurants.

For those who are in search of a stimulating gastronomic experience, Vila de Todos os Santos, located in Macaraípe beach, is a must-stop. The spot, placed only a couple of miles away from Porto de Galinhas, gathers several bars and restaurants and offers an exciting nightlife.

Porto’s various dishes are one of the most interesting (and savory) ways of knowing this delightful destination. Make sure you have this city in mind when planning your next vacation!

By Plane
+55 (81) 3322-4188
Porto de Galinhas is located approximately 60 km from Recife International Airport, the only airport in the region. Since it is so close to the capital city, getting there is very easy.

By Bus
+55 (81) 3207-1088
Buses from Recife to Porto de Galinhas depart from three different locations: Santa Rita Wharf Bus Station, Recife Bus Terminal (TIP), and Recife International Airport. The coaches take approximately two hours to get to Porto de Galinhas. As there is no bus station in Porto de Galinhas, the bus makes several stops along the main street in the village.

Personal Vehicles and Rentals
Visitors can drive from Recife to Porto de Galinhas. If you are leaving from Recife Airport, you will need to take Federal Highway BR-101 and later turn off into State Highway PE-060, which will take you to the district of Ipojuca. From there, you will follow State Highway PE-038 to the city of Nossa Senhora do Ó. After that, take Federal Highway BR-009, which passes by Muro Alto Beach and Cupe Beach, and goes all the way to Porto de Galinhas Village Center.

On Foot
The Porto de Galinhas coastline stretches for 18 km. A walk along the waterfront and around the village center is great fun.

Personal Vehicles and Rentals
Since local traffic is really light, a good option to get around is to rent a car.

Taxis and Ridesharing Companies
One of the options to get around the city is to use taxis and ridesharing companies.

Porto de Galinhas is a destination that can be enjoyed all year round. The average temperature in the region is 28°C and the weather is constantly warm.